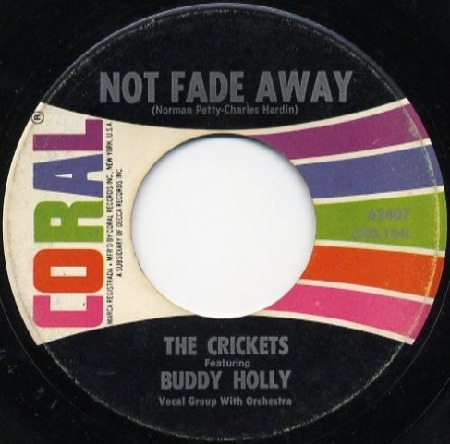 1. THE CHIRPING CRICKETS
Buddy Holly, alongside rhythm guitarist Niki Sullivan, bassist Joe B. Mauldin, and drummist-extraordinaire Jerry Allison, formed the immaculately suited, fully self-contained singing/songwriting template upon which some of the greatest pop-rock bands since, from those Beatles most obviously on down, were inextricably linked at the hip.

2. BUDDYâ€™S BUDDY
When no less than that up-coming King of Western Bop Elvis Presley first blew into Lubbock, Texas on tour in 1955, homeboy Buddy Holly was not only right there in the front row cheering him on, but afterwards appointed himself the Hillbilly Catâ€™s exclusive host, guide and confidant for the ensuing sixteen hours. Duly inspired, Buddy immediately revamped his burgeoning Crickets from an alt.-bluegrass combo into Lubbockâ€™s very own Elvis, Scotty and Bill â€¦so successfully so, in fact, that several months later, when Elvis triumphantly returned to town, Buddy Holly had graduated from mere tour guide status to that of official on-stage opening act.

3. LEARNING THE GAME
After somehow failing to impress the usually infallible Owen Bradley with â€œThatâ€™ll Be The Dayâ€Â at a 1956 demo session (â€œthe worst song I ever heardâ€Â was his verdict), Buddy determinedly drove one thousand miles from Nashville to the Clovis, New Mexico studios of Norman Petty, where over the next eighteen months they turned a simple two-track facility into an audio workshop/lab from which came not only the look and attitude, but the very sounds of the 1960â€™s to come. Despite his so obviously prescient George Martin ways though, Petty must be docked serious points for screwing Buddy royally over songwriting credits, royalties, and even concert proceeds until the Holly estate could eventually be forever wrenched from his Machiavellian claws.

4. LISTEN TO ME
It may have lasted only twenty-five days, but when Buddy and his Crickets toured the United Kingdom in the spring of 1958, those watching closely and taking serious notes for future use were, amongst thousands of others, John Lennon and Paul McCartney (whose first-ever recording was a near note-perfect â€œThatâ€™ll Be The Dayâ€Â shortly afterwards), Mick Jagger and Keith Richards (the former already proud owner of the Chirping Crickets album), Graham Nash and Allan Clarke (who soon grew their two-man Everlys act into the full, named-in-guess-whoâ€™s-honor Hollies), and pioneering British record producer Joe Meek â€¦who subsequently became so obsessed over Holly that he not only killed his landlady, but himself on the eighth anniversary of Buddyâ€™s own tragic demise.

5. NOT FADE AWAY
It did indeed take a Buddy Holly composition to first put The Rolling Stones securely into the American hit parade with, at the very height of Beatlemania, Lennon/McCartneyâ€™s â€œI Wanna Be Your Manâ€Â unceremoniously relegated to the singleâ€™s B-side! And speaking of whomâ€¦

6. WORDS OF LOVE
Buddy wrote the best song on the Beatles VI album; and, come to think of it, maybe even on Beatles For Sale.

7. FOOLâ€™S PARADISE
Buddyâ€™s wealth of songs have proven so adaptable, durable and downright sturdy as to withstand covers from the likes of Rush (who also debuted on seven-inch vinyl with â€œNot Fade Awayâ€Â I kid you not), the Grateful Dead, The Knack and even Linda Ronstadt. Not to mention â€œItâ€™s So Easyâ€œ (-Off oven cleaner) and â€œOh Boyâ€Â becoming â€œOh, Buick!â€Â television jingles at the behest of Hollyâ€™s supposedly sympathetic post-Petty publishing magnate Sir Paul McC. Quite highly recommended nevertheless is the 1977 McCartney-produced Holly Days, um, tribute album by then-Wing Denny Laine.

8. MAYBE BABY
Years before he was to become the serial tragic clown of television reality programming, that perennially short-pant-legged dust storm known as Gary Busey deservedly nabbed an Oscar nomination for his title role in 1978â€™s Buddy Holly Story. Now while its script may have taken inexcusable Hollywood shortcuts in recounting our heroâ€™s life and music, at least Gary, alongside co-stars Don Stroud and Charles Martin Smith, became pretty damn garage-worthy Crickets all over the filmâ€™s soundtrack, performing as close to live whenever possible before the unforgiving cameras.

9. CRYING, WAITING, HOPING
Weeks before his last-ever tour, a newly married Holly sang several song sketches into a tape recorder in his Greenwich Village apartment for what turned out to be posterity. Having already hinted at still non-categorizable sounds-to-come with tracks like â€œEverydayâ€Â and â€œWellâ€¦ All Right,â€Â Buddyâ€™s last recordings leap even further into the unknown with covers of Ray Charles (!), Bing Crosby (!!), plus Hollyâ€™s own final compositions. Exquisite guitar-and-voice-only recordings, they are far more than simply â€œunplugged.â€Â They are sublime, heartbreaking, and totally unique. As with most things Holly.

10. STANDING IN THE DOORWAY
"And I just want to say that when I was sixteen or seventeen years old, I went to see Buddy Holly play at Duluth National Guard Armory and I was three feet away from him. And he looked at me. And I just have some sort of feeling that he was — I don't know how or why — but I know he was with us all the time we were making this record in some kind of way."
â€” Bob Dylan, 1998 Grammy Awards acceptance speech for Album of the Year Time Out Of Mind.