The Welsh never neglected their homegrown Dylan, but the English-speaking pop world only recently discovered this powerful artist via Rhino Handmade’s reissue of “Outlander” (1970/2003). The 19 tracks on this comp span 1965-70, commencing with an early English-language 45 in a gentle, slightly primitive troubadour vein, then delving deep into Stevens’ more personal and intense recordings in his native tongue. I have only the vaguest notion what he’s singing about on tracks like “Yr Eryr a’r Golomen” and “Glaw yn y Dail,” but anyone conversant with the electric folk idiom will be in comfortable territory as these intensely emotional, sometimes psychedelic tunes unfold. The Welsh language has a nostalgic, eerie quality that makes Stevens’ unique work appealing despite the language barrier. Stay with it till the last few tracks, the seldom-heard and hard rocking Welsh recordings from the “Outlander” sessions. This set includes notes on each of the EPs, vintage sleeve art and a handwritten note from the artist.

E- is for Emerals, his first band

M- is for melody, and ain’t his sweet

T- is for tempo, which the multi-instrumentalist kept

T- is for tape, which when rolling can capture gems

R- is for "Really Wanted You," which is pretty near perfect

H- is for Hawthorne, his hometown

O- is for "Only Lovers Decide," little heard but loverly

D- is for daisy, daisy fresh to be precise

E- is for easy, because he makes it look that way

S- is for sixties and seventies, when he recorded mainly 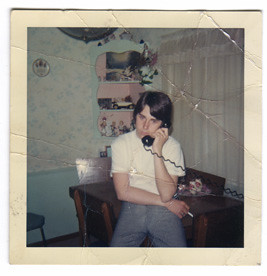 Put em all together and they spell EMITT RHODES, a good friend of the Scram gang, and subject of one of our more jaw-droppingly frank interviews. In honor of Emitt, we’ve created a gallery of rare photos from his personal archives up on flickr, which you may peruse at leisure. Many of these only appeared in Scram #18, and others have never been publically seen at all–including a few from a roll of unprinted slide film circa 1968. Thanks, Emitt, for all the great pix! And if you like deliriously catchy melodic pop, you owe it to your ears to pick up his disks, in thrift stores or import CDs.

The Lost in the Grooves book is available at better bookshops or through Amazon. For other Scram book news, including live events and readings, click here.

Lostinthegrooves.com is the online face of the Lost in the Grooves anthology and Scram magazine, the source for downloads and information about the great, neglected artists whose music deserves wider acclaim. Visit our online store to sample and purchase music by Brute Force, Costes, Dream Lake Ukelele Band, The First Team (“Chevrolet Sings of Safe Driving and You”), Fugu, Garland, Gibson Bros, Juviley, The Lipstick Killers, The Orgone Box, Sex Clark 5, Suckdog and John Trubee.

Check back soon for new music, featured artist blogs, concert announcements and more. Or sign up here to be updated by email.

ABOUT THE BOOK: Pop music history is full of little-known musicians, whose work stands defiantly alone, too quirky, distinctive, or demented to appeal to a mass audience. And even the well-known musicians are frequently misplaced or misunderstood within that pop history. The book Lost in the Grooves: Scram’s Capricious Guide to the Music You Missed explores the nooks and crannies of the pop music world, unearthing lost gems from should-have-been major artists (Sugarpie DeSanto, Judee Sill), revisiting lesser known works by established icons (Marvin Gaye’s post-divorce kissoff album, Here My Dear; The Ramones’ Subterranean Jungle), and spotlighting musicians who simply don’t fit into neat categories (k. mccarty, Exuma). The encyclopedic alphabetical structure throws off strange sparks as disparate genres and eras rub against each other: folk-psych iconoclasts face louche pop crooners; indie rock bumps against eighties soul which jostles proto-punk; outsider artists set their odd masterpieces down next to obscurities from the stars; lo-fi garage rock cuddles up with the French avant-garde; and roots rock weirdoes trip over bubblegum. This book will delight any jukebox junkie or pop culture enthusiast.