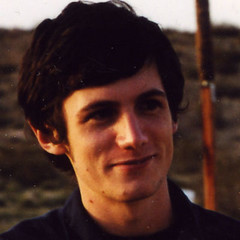 Peter Geiberger, once one of our most promising young troublemakers, artists and social misfits, a creature of great natural intelligence, charm and wit, a musician, visual artist, writer and prankster, died on Wednesday.

I regret that was not able, when I had more influence over him than most, to convince him that dabbling in heroin was stupid. Of course the drug became huge in his life, stole many of his friendships, his time and imagination, and eventually killed him. He dies owing me $50 and a lobster dinner, and the life he ought to have lived instead of the one he did.

I will remember the brilliant 17-year-old with the pre-Raphaelite features who dazzled the tired old Cacophony Society when he began attending events nearly a decade ago, his fearless ability to grab a guitar or some hideous prop and make himself the center of attention, how sympathetic a listener he was when needed despite his snarky ways, how happy he was when drawing, and his essential sweetness.

I will also remember the memorial service I helped organize after Peter’s death was faked on Hallowe’en 2000, as part of the conclusion of the grand Cacophony Society prank. It is all quite surreal, but at least Peter had that rare opportunity to attend (or at least hear about) his own funeral, and receive many posthumous accolaydes from people who loved him.

Goodbye, dear Peter, always in so much pain, now free of that at least.

Postscript: I have put Peter’s two delightful features for Scram online: his advice for How to be a Badass (which explains his entire personality) and his history of the black velvet painting tourist market. Around this time (1999) he published his own little zine, Scrum, as well.