Many of his most important images came courtesy of James Kriegsmann, the longtime industry photographer who shot Frank Sinatra, Kate Smith, Buddy Holly and hundreds of early stars. Mr. Ochs paid about $50,000 for the entire collection in 1988 when Mr. Kriegsmann was in his 80’s and struggling. After signing the contract, Mr. Kriegsmann had a few words for the quirky enthusiast who reveled in the find, and was already itching to release the wealth of history to fellow rock fans.

Either Mr. Kriegsman wasn’t entirely honest with Mr. Ochs, or Mr. Ochs isn’t truly interested in acquiring every piece of pop imagery ever captured on film. How else to explain the astonishing trove of late Kriegsmann material rescued from a Venice alley by a friend of Jennifer Sharpe’s, and lovingly scanned and shared through her Sharpeworld site? Sure, a lot of the stuff in Jennifer’s stash documents a world of entertainment removed from the usual Michael Ochs Archives themes, but there are plenty of oddball musical portaits in there. Did Kriegsmann hide these late images out of shame or misplaced judgement? Or could Ochs see into the future and anticipate no call for an 8 x 10 of Nbuda Funkshun? Tell that to the tens of thousands of people who have gleefully clicked through the Jennifer Sharpe-preserved Kriegsmann Files on flickr! 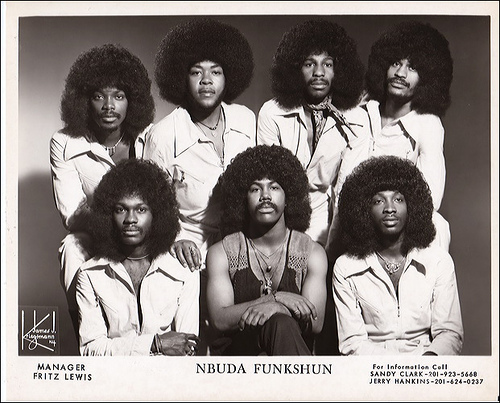 Anyhoo, it’s a mystery. But the Venice alley stash was not the whole of the missing Kriegsmann archives. As a matter o’ fact, I own a Kriegsmann 8×10 myself, of a magician and his foxy go-go booted assistant, and even used it as a Scram centerfold. Found it in a junk shop on Abbot Kinney a few years back, in a small pile of similar pics.

Could Michael Ochs, longtime Venice resident, have put the "dregs" of the Kriegsmann files out for the garbage man to collect, only scavengers happily got to it first?