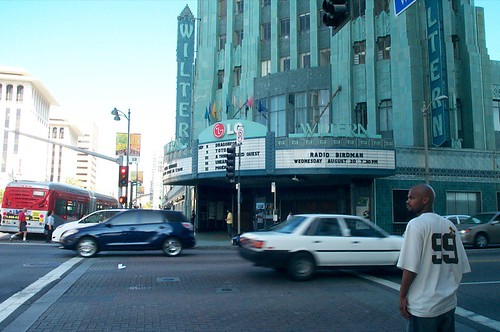 Last Wednesday afternoon I wound my way south through the secret north/south axis of the city’s center, on my way to a happening that might have sprung fully formed out of one of my more frisky juvenile fantasies: my all-time favorite rock and roll combo since 1983, the mighty Radio Birdman, were making their debut US appearance tonight in the grand art deco Wiltern Theater in my home town of Los Angeles.

Two decades’ journalistic celebration of Birdmen and its offshoots have earned me the friendship of the band’s leaders, so it was with knowledge that a backstage pass awaited that I parked around the corner from the venue, just up the block from L. Ron Hubbard’s first Scientology offices. What a kick to see the letters RADIO BIRDMAN on that lovely green marquee.

I first buzzed and gained access to the front door, only to be directed round the back, where sound check was just finishing. As the door closed behind me, a couple of lithe young ladies made a dash for it, just catching the wood before it slammed. I mentioned this to guitarist Deniz Tek a few minutes later, when he expressed concern that the group might not be able to fill such a huge hall, noting that when teenage girls are sneaking in, you don’t have much to worry about. "Teenage girls…?" he mused, "We never had teenage girl fans—except you, of course!" These are different, and better times, it seems. So a few hours before the band defeated a criminally unskilled sound man with a career-spanning performance packed with poetry and raw power, I sat down with three of the original Birdmen for a brief chat about the state of the band in 2006, and their expectations for the tour to come.

Lost in the Grooves: Is "Zeno Beach" the record you would have done after "Living Eyes," or is this a building on what you’ve all done individually and together?

Deniz Tek: No, we couldn’t have made it after "Living Eyes." It’s the result of all those years of individual experience and collective Radio Birdman experience.

Rob Younger: Yeah, it is, I think.

LITG: So you think it’s just a merging of all of your influences and everything that’s come before?

LITG: I thought so! It sounds a lot like the New Christs.

DT: A lot of people have said that to me.

LITG: Who do you think is coming to see Radio Birdman in America?

DT: Well, Kim Cooper for one.

RY: There were a lot of names on that guest list I recognized. (laughter)

above: Carmen Hillebrew with Jack Lord and Rob Younger, after the show

DT: I suppose it would be a mixture of musicians, record collectors, people who sort of go into music, rock and roll history a little bit more deeply than average. Otherwise how would they know about it? Or maybe a few people who have come on board with the Sub Pop compilation, because I think there was some word of mouth about the band before that—bands would talk about who they liked, and a lot of bands like our band, whereas not very many people in the general population would know about it, but bands know about it. And they’d talk about it—people couldn’t find the records in America, it would be difficult, until the Sub Pop thing.

Chris Masuak: There are some guys from San Diego coming up who were involved with fanzines. Kenzo—I can’t remember his fanzine, but he used to have a fanzine about the Tribesmen, New Christs. 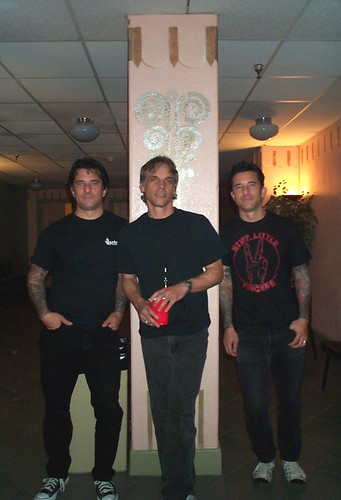 above: Art & Steve Godoy with occasional bandmate Deniz Tek, after the show

RY: Yeah, my friend James said people really only know our first album here, don’t even know the second one, let alone had a chance to worry about the third one.

LITG: That’s true. I had to go to England to get the second one.

RY: But there’s stuff from "Living Eyes" on "The Essential" [Sub Pop comp], that’s what he was saying, cos it was released here, that first one, "Radios Appear."

LITG: How did it come about, you coming to America?

DT: There were a couple of stabs at it over the last five years or so, but none of it panned out because we couldn’t afford to come. And I guess finally with the new album, it gave us enough momentum to get enough good gigs to make it possible.

LITG: You released it independently in Australia, right?

LITG: So how’s Yep Roc been for you? They treating you well?

DT: Yeah, they seem to be. They’ve done a good job so far with setting up interviews and promotion and stuff like that, and they’ve been really pleasant and easy to work with. I think—I was talking to Rob about this—they’re small enough that it’s that middle layer of record companies. We wouldn’t get anywhere at all with a big label, we’d just be put on the back shelf or under the rug and no one would ever hear of us again and nothing would happen, whereas with that middle layer, it’s big enough to get distributed around, but not so big that we get lost, cos you’re not, y’know, a big earner.

RY: They remember your first name. 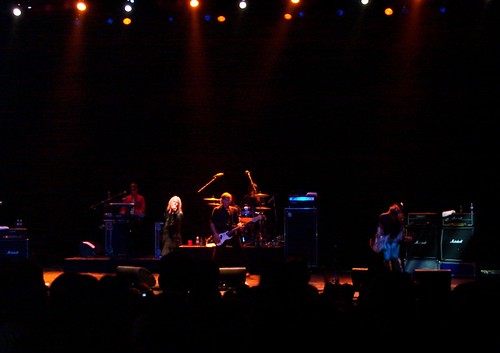 LITG: Is there someone at the label who is a long time fan?

CM: I think that there label’s devoted to stuff that they consider to be almost eclectic or artistic.

CM: Yeah, that seems to be their reason.

LITG: So it’s sort of a boutique—everything in it’s worth looking at, cos it’s been curated.

CM: I’d rather be curated than be in a boutique, though! (laughter) You don’t want to get too precious.

DT: If you’re curated, that means you’ve been put in a museum.

LITG: Under glass, or in a gallery, maybe.

CM: I don’t want that, either.

LITG: It’s not waxworks, it’s rock and roll. Favorite song on the record?

DT: "Locked Up." That’s my favorite one today, cos I just heard it.

RY: I like "Remorseless," probably cos we haven’t been playing it for a while.

DT: Yeah, we should put that back in the set. It’s not in tonight’s, but we’ll do it tomorrow night.

LITG: Any surprise cover versions for the tour?

DT: Oh, there might be a cover version, but it won’t be a surprise to anyone. (laughter)

LITG: Is it a really long word? ["Transmaniacon MC"]

RY: Same band. [it turned out to be "Search and Destroy," and it was a knockout]

LITG: Ohhh, okay. I think those are all the questions I want to pester you with. Thank you gentlemen! 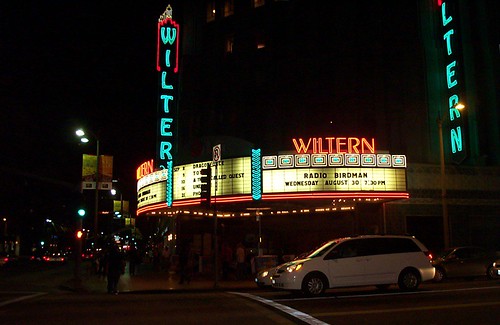 Watch this space for more Radio Birdman coverage, including rock critic Don Waller’s no holds barred take on the band’s place in the pop pantheon circa 1976 and today.