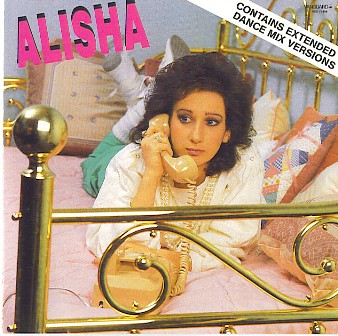 When it comes to female teen-pop singers in the 1980s, Debbie Gibson and Tiffany are the names most people know.

But in 1984 — two years before either those two teen queens even released a song — ÂÂ a 15-year-old New York-based singer named Alisha was burning up the dance charts with a tune called â€œAll Night Passion.â€Â

The problem was that the dance charts were pretty much all Alisha burned up. â€œAll Night Passion,â€Â which boasted a sultry medium tempo and fervent vocal, hit Number Three on Billboardâ€™s dance chart, but it only got as high as Number 103 on the Hot 100 (which means it just hit Billboardâ€™s â€œBubbling Underâ€Â chart).

Maybe the tune was arranged in too much of a â€œfreestyleâ€Â dance style for mass consumption. Or maybe the arbiters of pop taste felt the chorus of â€œAll night passion gets me through the dayâ€Â was too risqué for a 15-year-old to be singing. Whatever the case, it unfortunately set the tone of the career of Alisha Itkin, who would have lots of dance chart success, but would never have a pop single rise higher than Number 54.

Of course, the teen music scene that exploded in the late 1990s didnâ€™t exist in the early 1980s. Even in the mid-1980s the music of Debbie Gibson and Tiffany was regularly derided in the mainstream press (OK, so their music wasnâ€™t â€œPet Sounds,â€Â but it wasnâ€™t half bad either). In the 1980s, music coverage was still all about what the Baby Boomers were listening to, and teen music wasnâ€™t given serious press attention until the Baby Boomersâ€™ kids started listening to it a generation later.

These facts at least partially explain why Alishaâ€™s best single, the brilliant Madonna knock-off â€œBaby Talk,â€Â only rose to Number 68 in late 1985. Why listen to fun teen sounds when you have, like, Huey Lewis and Phil Collins?

And make no mistake, Alishaâ€™s first album was designed for total teen appeal.

The cover featured the singer in a very â€œteenage girlâ€Â pose â€“ perched on her bed with telephone in band. More an extended EP than an LP, it showcases the production techniques of Mark Berry, which then sounded futuristic, but now probably sound retro to anyone under 40.

Alisha released a second LP and got a song on the soundtrack of the romantic comedy â€œMannequin,â€Â which featured Kim Cattrall in her pre-â€œSex and the Cityâ€Â days. As the decade turned, her cover of Fire on Blondeâ€™s â€œBounce Backâ€Â became her biggest hit of all, rising to Number 54 on the pop charts. It also earned her a place on countless dance compilations (and endless spins on the USA Networkâ€™s â€œDance Party U.S.A.â€Â teen dance show).

You can find out more about Alisha at her MySpace page. Her first LP is available at Amazon and her â€œBaby Talkâ€Â video can be seen at complete with its solly mock-dramatic spoken introduction at YouTube.com.