Last Wednesday, I cornered rock crit and bon vivant Don Waller in the lobby of the Wiltern Theater between the BellRays and Radio Birdman sets to get his thoughts on this historic event. Before I started the tape recorder, he told me I was wasting my time, since he had nothing much to say. I know Don well enough to know how absurd that statement was. Here’s the "Back Door Man" zine founder on the state of rock when Radio Birdman first came ’round, the underappreciated glories of the Australian scene, and his expectations for the evening…

Lost in the Grooves: Do you remember Radio Birdman from 1976, when the record came out in the US?

LITG: And what was the scuttlebutt on the street?

DW: Well, the record came out, and it was like anything else on Sire—there was so little that was new at the time, that of course everybody was interested in it. I remember hearing it and not thinking all that much of it. "Oh yeah, it’s okay." It was just kinda dwarfed by, y’know, the Clash and the Pistols, the Talking Heads, the Pretenders, all the other stuff that came out. In retrospect, the record has aged well. The fact that they didn’t play here didn’t help ’em. They broke up before anybody really got a chance to know who they fucking were! So I’m looking forward to seeing them tonight. And I like the fact that they put out a new record along with the tour, because we’ve seen enough people get back together with no new product. And this is just as good as the other record, actually, it’s not that much different. And they have an idiosyncratic sound. The keyboard thing is a weird touch; I’m a big fan of double lead guitar bands or triple lead guitar bands. I like guitars! And the fact that they got 4/6 or 2/3 of the original band back to do this is fine. I’ve heard the New Race record that these guys did with Asheton and Thompson—it’s pretty decent. Again, it’s an artifact that’s aged well. All that shit on Dave Laing’s "Do the Pop" compilation is really good. Not all that much of it got heard here. Some of it’s on that "Nuggets 3" record, that "Children of Nuggets" record that came out a couple years ago. LITG: So you hadn’t heard any of that stuff before it got comped?

DW: No, I didn’t hear the Celibate Rifles or the Lime Spiders or the Eastern Dark’s "Johnny and Dee Dee"—an amazing song! "Slave Girl" is pretty great. All that stuff. But we never heard the Master’s Apprentices or the Black Diamonds or that sixties Australian/New Zealand shit, and that’s all really good too. It’s on the "Nuggets 2" box, and that stuff’s as good as anything that was cut anywhere. In Australia, it’s really hard to get to the other side of the world to here or to England. I mean, to be as good as the Easybeats or as good as AC/DC, or even the fucking Bee Gees if you wanna go that direction. I mean Jimmy Barnes is a real good singer, should have been bigger.

DW: Jimmy Barnes, was in Cold Chisel and all that. He’s got kind of a Paul Rogers kind of voice, almost like a Frankie Miller kind of thing, but in that quality. He’s a draw in Australia. It’s just tough for them. But the good stuff is really good. And the thing about this is that it proves if you do something good and you really mean it, y’know, it’s like Zen parable of throwing a pebble into a pond, you don’t know where the ripples are gonna go. The good stuff gets discovered, t he good stuff gets word of mouth, the good stuff gets passed on down. Especially when things are bad, then people start rummaging through the bargain bins or the cut outs and the thrift stores and all that stuff—because that’s all bohos can afford anyway! Basically, in a fuckin’ Paris Hilton world…

LITG: That was Don Waller, who told me he had nothing to say. Thank you, Don Waller. (laughter) What are your expectations for the show?

DW: I’m looking forward to it. I think they’ll be good. Based on the new record, I think they’ll be very powerful, very Detroit. That’s the thing, Deniz Tek, there’s something in the fucking water in Detroit. They still produce good bands, the Dirtbombs, the White Stripes, the Detroit Cobras, all that shit, they still keep turning out good bands. God bless ’em! 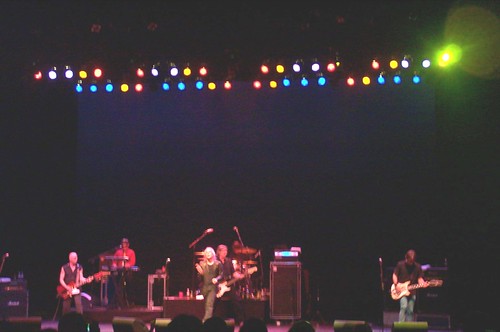 above, Radio Birdman live at the Wiltern, pic: Kim Cooper