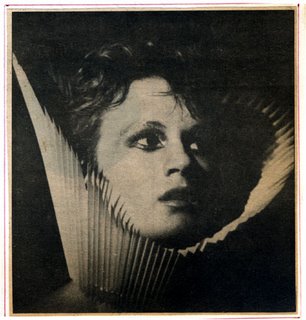 I bought the first Jobriath album in 1974 at Rare Records in drizzle-fizzled Manchester. Neither for the ears of the elderly nor for those with middle-aged perspectives, Jobriath voiced the excess destitution of New York’s most tormentedly aware, whose lives were favoured by darkness. Cinematic themes of desperate dramas in paranoid shadows were presented as choppy and carnivalesque melodies.

The hairy beasts who wrote for the music press laughed Jobriath off the face of the planet. He was, at best, merely considered to be ‘insane’. It was clear that Jobriath was willing to go the gay distance, something that even the intelligentsia didn’t much care for. Elton John knew this in 1973; Jobriath didn’t. Surrounded on all sides by Journey, Styx, and Bachman-Turner Overdrive, Jobriath was at society’s mercy. Yet it could have worked so well.

Neither America nor England was quite ready. Thus, Jobriath quietly expired, buried without a single line of ceremony in any music publication throughout the world.

Sporting collar, tie and pinstriped suits designed by John Stephen, Sixties and Seventies lesbian singer-cum-thespian Polly Perkins cut a dashingly gender-bending figure, and was frequently photographed smoking fat cigars. Aged just 15, she was the youngest performer to appear nude at the Windmill, and never hid the fact that she was a lady-lover – rare for any entertainer of the time.

Raised in a theatrical family, Polly sprinkled her speech with Polari and, although hit records eluded her, she racked up newspaper column inches because of her camp stunts. During her spell as the first compere on cult TV show Ready, Steady Go, Polly paid a young male ‘ex-lover’ to fling himself at her.

She became a much-loved figure in Soho clubs for her smoky rendition of Edith Piaf’s ‘Je Ne Regrette Rien’ and her self-penned lesbian anthem ‘Superdyke’. In 1973, Decca released her album Liberated Woman. She now lives in relative obscurity in Spain with her girlfriend and her youngest son Timmy.