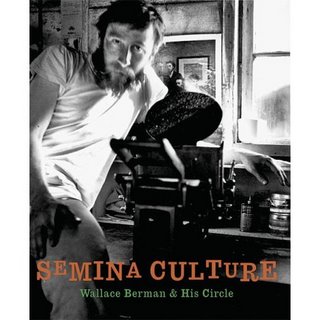 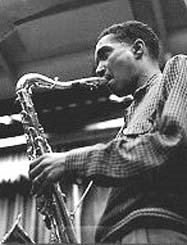 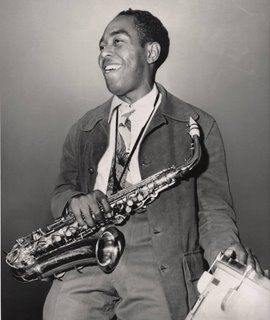 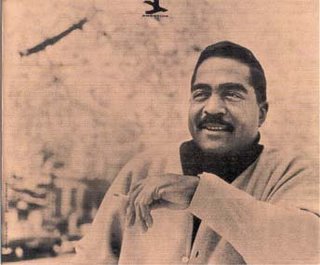 The songlist down below was presented to an audience on October 29, 2006. I made 20 CD copies to give out to the audience for free. This of course was in conjunction with the Semina Culture exhibition that is taking place at the Berkeley Museum. 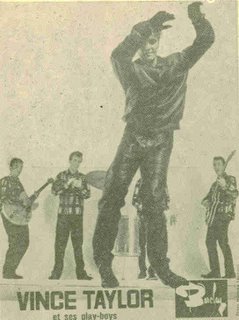 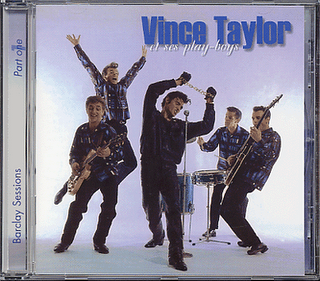 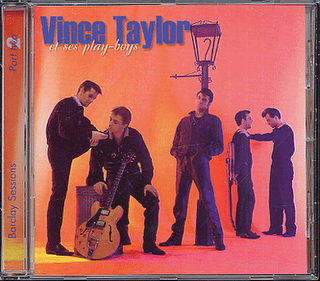 Vince Taylor was a strange boy. It is unlikely if you live in the United States that you have heard of his music. Whatâ€™s remarkable about the man is not really the music, but more of his image that was thrown into the world of pop circ. Very early 60â€™s. Itâ€™s not enough to hear his recordings, but to see him live or better yet via photographs. 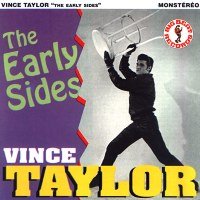 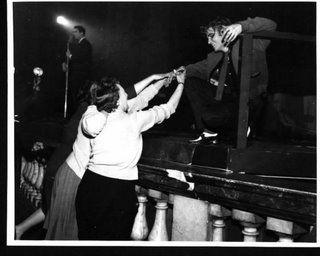 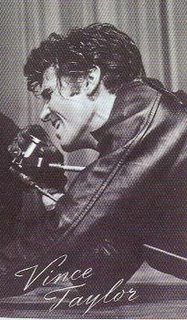 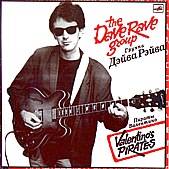 What ever happens
when the Dave Edmunds of Canada
reunites with, yes, the Nick Lowe of Canada
right there On Stage again ?

For the answer to these,
and oh So many other merry musical questions,

simply Meet Us at around 11 PM
on the night of Thursday, November the 9th
within The Baggot Inn,
right there at 82 West 3rd Street
in Greenwich Village.

MANY splendid Seconds of Pleasure are guaranteed for all !! 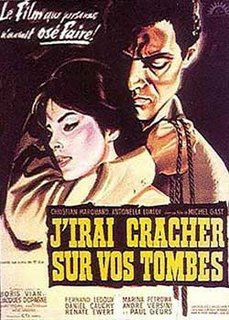 If you ever get a chance do see â€œJâ€™irai cracher sur vos tombesâ€Â (I Spit on Your Graves). Itâ€™s a strange film. I have it on DVD, and it has no English subtitles, but I know the story. Like the book the drama takes place in the U.S., yet was filmed in France. And it looks like a Europeanâ€™s idea what a small U.S. town looks like. 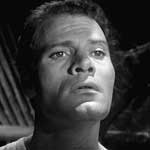 My favorite scenes are the ones in the bookstore. I love the magazine display in the store. Also I like the thought that the killer works at a bookstore. I work at a bookstore and therefore I feel like I am in good company. 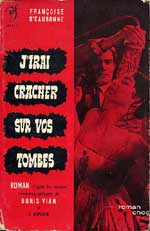 As one knows by now, Vian had to sneak into the preview of this film. At the time he was arguing with the filmmaker. Basically he hated it. He died during the screening. 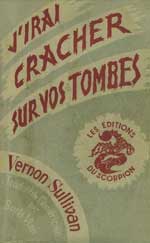 I think I got this link from Slate: a fascinating article on the iPod shuffle mode.

Those sorrowfully not as fully aware as they certainly should be now of those two most undersung American musical heroes known still as Rick Harper and Tom Staley at last have one fabulous chance to meet them both, right there squarely together again for the next time, on this single great CD from our friends over at HiVariety Recordings.

1.  INSIDE OUT…..NRBQ head headstrong crosstown atop the (Guess Who?) “Bus Rider.”

2.  RHINO IN THE ROOM…..startlingly, so subtly so very very R. Harperesque.

5.  THE CANYON IN THE HEART…..If Chris Isaak’s dogs ran free… Some lunatic has put online all 2,846 of Pauline Kael’s capsule reviews from her fine compendium, 5001 Nights at the Movies. While I don’t advocate the unauthorized hijacking of anybody’s copyrighted works (the site’s been out there for a while now, so who knows whether or not it’s been sanctioned), it’s indeed handy having these insightful cinematic kernels available at one’s fingertips. (Which is to say, it saves me the arduous task of getting up off my butt and taking the book itself off the shelf.) Such is the insidiousness of the Internet.

On paper or in cyberspace, one thing these reviews reveal is that Kael was at her best writing in the long form. Reduced to the amount of space usually permitted in Entertainment Weekly, often lost are the insights, the snap of her words, and the sense of enjoyment that shone through her writing. Kael, like Paul Nelson, was as much a stylist as she was a critic, in some cases rendering the reviews she wrote better than the films she was writing about.

A message from Andrew Earles about a very rare and Lost in the Grooves performance not to be missed!

My good friend DJ Ian Marshall is putting on a show on November 1st at Little Pedro’s with the 1960’s folk rock enigma Bob Lind. This will be Bob’s first gig in Los Angeles in over twenty years and he still sounds fantastic.

For those of you unfamiliar with Bob Lind, he is best known for his big hit song of 1966 “Elusive Butterfly”. Following the success of that single Bob went on to record two exquisite baroque-pop LPs in 1966, “Don’t Be Concerned” and “Photographs of Feeling” with legendary over-the-top producer Jack Nitzsche (famous for his work with Phil Spector and Neil Young). These 2 albums are underrated, unknown classics and must haves for fans of sixties music in the vein of The Left Banke, The Byrds, PF Sloan, early Gordon Lightfoot, Judee Sill, Donovan, Richie Havens, Val Stoecklin, Margo Guryan, Love, Dylan…etc etc… but Lind’s strange poetry, unusual guitar chords and unique vocal-stylings are truly indescribable. A nice CD comp of his material from this period is out-of-print but still findable in used shops- it’s called “You Might Have Heard My Footsteps”. The original LPs are commonly found in the folk section of used record shops in the $1 to $12 range.

In 1971, Lind released another fine album in more of the mellow singer-songwriter vein, with tinges of country rock, entitled “Since There Were Circles”. Guest musicians on these sessions include Gene Clark, Bernie Leadon, Larry Knecthel, Carol Kaye & Hal Blaine. This one is harder to find on LP, but a CD re-issue is in the works.

Bob lives in Florida these days. He has been in and out of retirement as a performer since the 70’s. Please don’t miss this rare chance to see a performance by this extremely gifted and unusual singer-songwriter. DJ Sir Ian of Marshall will be DJ-ing a set of great 60s & 70s obscurities in the folk-rock / baroque vein; so this will be a fun themed party for anyone who likes this sort of thing. This is an early invite- I’ll repost as soon as I have any news on an opening act (if there is one).

nydeborah and I attended the opening of Annie Leibovitz: A Photographer’s Life, 1990-2005 at the Brooklyn Museum.

nydeborah‘s persistence (tempered, I hope, by my amusement), we prevailed over the drastically mismanaged distribution of first come, first served tickets for the “conversation with the artist” and landed seats in the first row, right in front of Leibovitz and museum director Arnold L. Lehman.

3. The pieces of paper fastened to our seat backs identified us as “Guests of Annie Leibovitz.” Whoda thunk it?

nydeborah got to ask Leibovitz a tough question about life and death and the whole damn thing. (Leibovitz’s life with, and the death of, Susan Sontag is a major concern of the exhibit.)

5. A last-minute addition to the evening’s festivities was a performance by Patti Smith on the museum’s fifth floor, right outside the Leibovitz exhibit.

6. We were (again) right up front, this time stage right, for the short but lovely acoustic concert (close enough to see Patti, before the show, emerge from a backstage meeting with Leibovitz, her mother, Sontag’s daughter, and assorted family members, and wipe a tear from her eye).

7. For her last number, Smith recounted how, a few years ago at her annual New Year’s Eve concert at the Bowery Ballroom, “Someone came backstage and told me that Susan Sontag had been dancing to this song.” Then she and her band launched into “Because the Night.” Leibovitz rose to the occasion to dance with her five-year-old daughter Sarah while, directly across from us, Sontag’s daughter kept wiping away the tears.

8. Afterwards, serpentining our way through the museum and admiring Leibovitz’s work, we happened upon Lenny Kaye, Smith’s guitarist (as well as rock critic and the man responsible for the classic Nuggets collection). After saying how much we’d enjoyed the show, I reminded him that we’d met before (last month at Paul Nelson‘s memorial service), and asked him if I might interview him for my book about Nelson. Kaye admitted that he hadn’t known Paul that closely. “So I’m not sure how much help I’d be to your book. But,” he added as we parted, “I look forward to reading it.”

9. On our way out, we wandered through the reception, which by then was winding down, weaving our way through the various looming Rodins as I snagged a few of the remaining potato chips.